Join Jonathan Moseley on this fabulous 5 day/4 night tour to the Netherlands which includes the opportunity to experience Floriade, a huge celebration of horticulture and floriculture, held every 10 years. 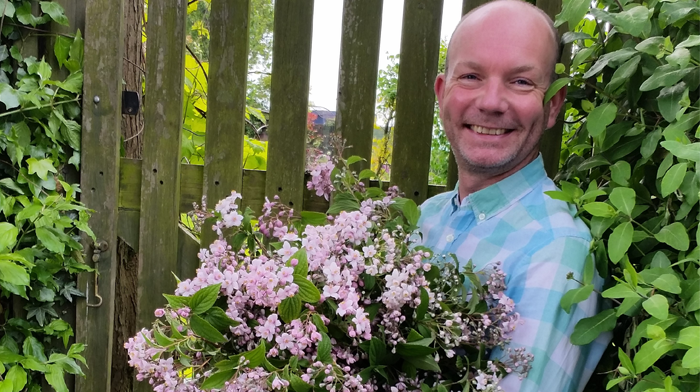 You will also visit the magnificent flowering gardens of Keukenhof, the decorative gardens at Palace Het Loo, and Life Gardens of the Groot Hontschoten. 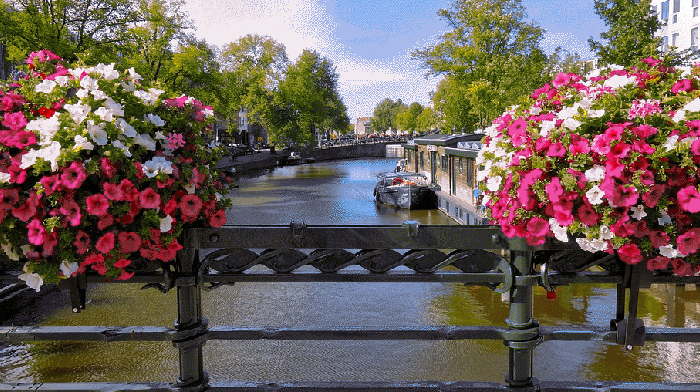 Floriade is a huge celebration of horticulture and floriculture, like the RHS Chelsea Flower Show on steroids… It’s a must-visit for anyone because it’s such a good day out – there’s art and fashion and food, as well as gardens and flowers.

£1150pp including flights with KLM from Manchester
Make your own way: £915pp
£220 Single Room Supplement
Optional Extra one hour canal cruise in Amsterdam:£19pp 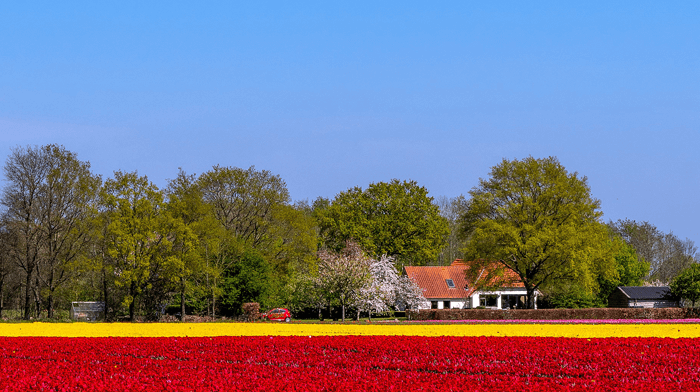 Tuesday 10th May
KLM flights from Manchester 09:00 arrives Amsterdam 11:15
Your Tour Manager will meet you at Schipol Airport.
A local coach will be there to meet you for your visit to Amsterdam.

We can suggest a canal cruise (+ £19pp) spend time at the Rijskmuseum or enjoy shopping and sight-seeing.

17:00 Depart Amsterdam
Journey to your hotel
18:00 Park Plaza Utrecht.
19:30 Welcome dinner at the hotel with Jonathan

Thursday 12th May 09:00 Depart after breakfast by local coach with your tour manager,
Visit Astrid van den berg at VD Berg Greenhouse
Demonstration
Tea/coffee and cake.
Shopping opportunity
Followed by visit to Keukenhof Gardens
17:30 depart and return to your hotel
18:30/19:00 arrive back to your hotel - evening at leisure

Where you will be staying

Inspired the Dutch art movement De Stijl, the Park Plaza Utrecht is an easy walk from the centre of this historic and vibrant canal city. The bedrooms boast all modern conveniences including smart TVs, Chromecast and Nespresso machines and the hotel offers free Wi-Fi and a 24/7 fitness centre. The restaurant CUBO kitchen is one of the best restaurants in Utrecht. 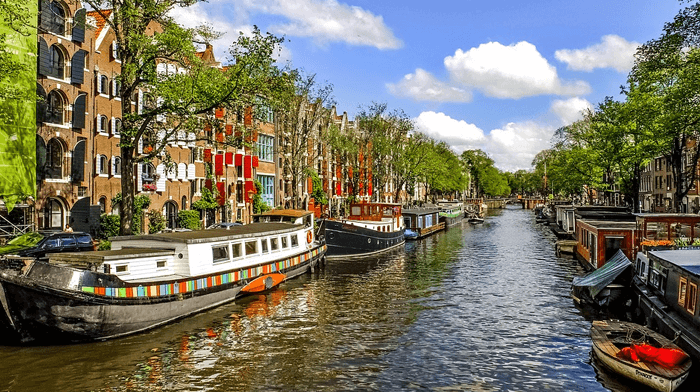 Return flights from Manchester with KLM 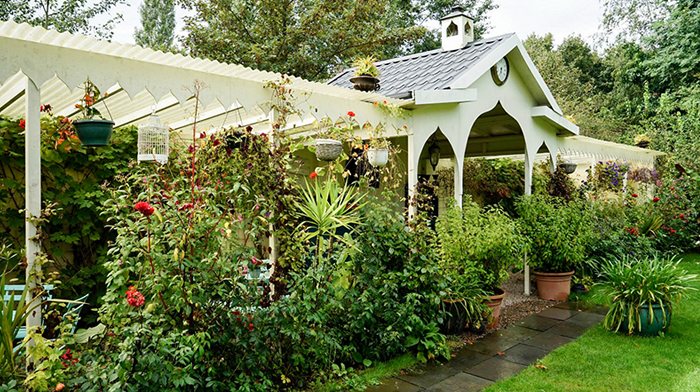 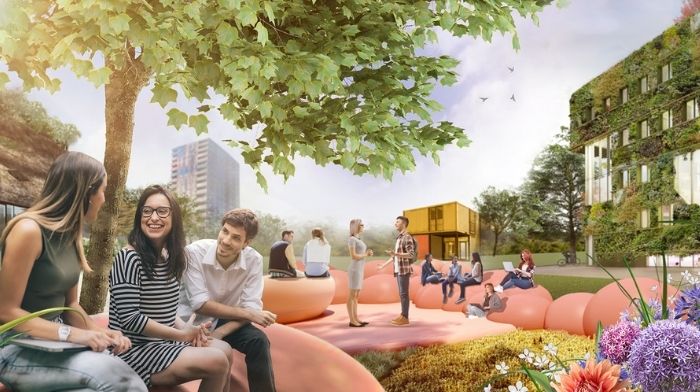 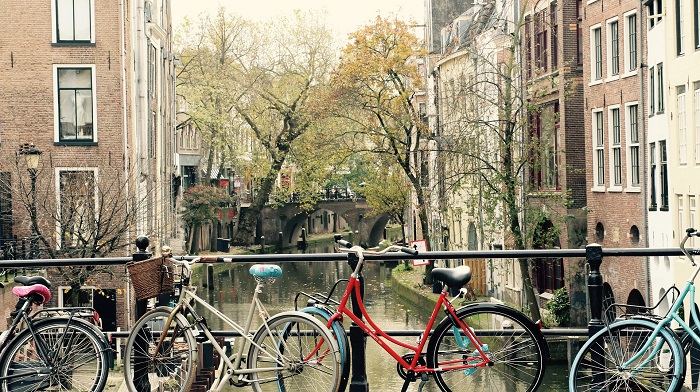 Less well-known than Europe’s other canal cities, but just as picturesque, Utrecht has a special charm. Quintessentially Dutch, it offers visitors both an authentic taste of the contemporary Netherlands and also a fascinating insight into its history. Initially designed as a medieval fortified city, the heart of Utrecht is enclosed by an inner canal ring measuring just under 6km so can be easily explored in a few hours. Here are our highlights.

The Dom Tower. At 112.5m high, this is the tallest church tower in the Netherlands and is considered the symbol of Utrecht. The tower was part of St. Martin's Cathedral, also known as the Dom Church, and was built between 1321 and 1382, to a design by John of Hainaut on the site of a Roman fortress. Most of the church was destroyed in a tornado in the 1500s, so only some parts remain, including the tower. There are 465 steps to the top, but the views when you get there are stunning! (Please note, you can only visit the tower as part of a 1hr guided tour.) 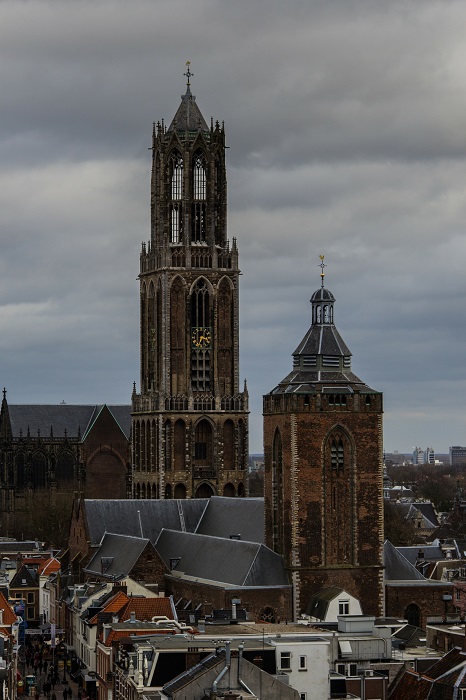 While you’re here, take a moment to visit the Pandhof garden. Once part of the old monastery garden, it is one of the most elaborately designed courtyards in the Netherlands. You can admire the 15th century cloister surrounding the courtyard as well. (Entry here is free and does not require a ticket to Dom Tower)

DOMunder: Located in the centre of Dom Square, this underground space traces 2,000 of Dutch history. Follow a route with special torch to experience history from the time the Romans built the castellum Trajectum, around 45 A.D, learn why Utrecht was the center of the Netherlands in the middle ages and even experience the destructive tornado that caused the nave of the Dom Cathedral to collapse in 1674.

The Centraal Museum: housed in a medieval cloister on the Nicolaaskerkhof, this museum boasts the largest collection of Gerrit Rietveld pieces in the world, as well the work of the world-famous Dick Bruna, and Dutch icons Jan van Scorel, Abraham Bloemaert and Hendrick ten Brugghen. It also provides a broad overview of 2,000 years of the country’s turbulent history.

The Utrecht canals: the only canals in the world to have wharfs and wharf cellars, the city’s waterways date back to the 12thC when the first canal, Oudegracht, was dug to change the course of the Oude Rijn River. Connecting the river Vecht in the north to the Vaartsche Rijn in the south, the Oudegracht became an elongated harbour. Large city castles were built along the canal and wharfs were added where boats could unload their cargos directly onto the land. These wharfs had deep cellars which served as water level storage spaces and pedestrian walkways, creating a unique two-level street system. Today these cellars are filled with shops, restaurants, galleries and cafes and no visit to Utrecht is complete without a drink or a meal in one of these atmospheric cellar restaurants.

Located slightly outside the city centre, but easy to get to from Utrecht Central Station (which is close to your hotel), The Rietveld Schröder House is a must for anyone with an interest in art and design. Built in 1924 by the designer Gerrit Thomas Rietveld for Ms Truus Schröder, this small family house is still strikingly modern. With moveable walls and design elements that connect inside with out, it embodies the principals of De Stijl artistic movement and has become one of icons of the Modernism. (Please note, advanced booking is required.) 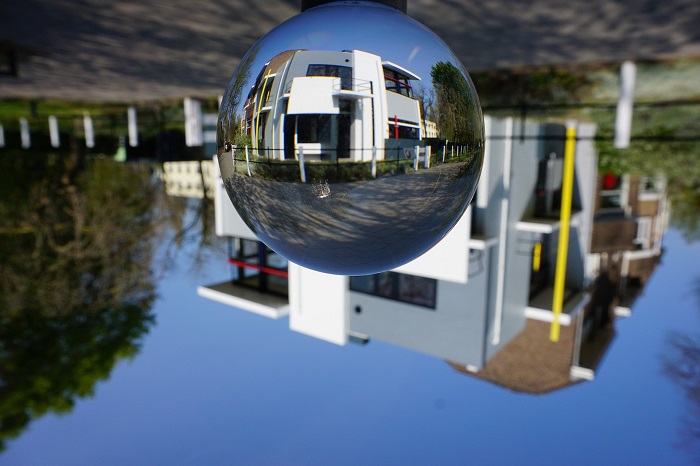 And don’t forget Miffy! Or Nijntje as this cute white rabbit is known in her home town. Created by the artist Dick Bruna, Miffy is one of the Utrecht’s most famous stars. Visit Nijntje Pleintje, or Miffy Square, to see the statue by Dick Bruna’s son, Marc Bruna, and cross the road at the world’s one and only Miffy traffic light on the Lange Vliestraat. 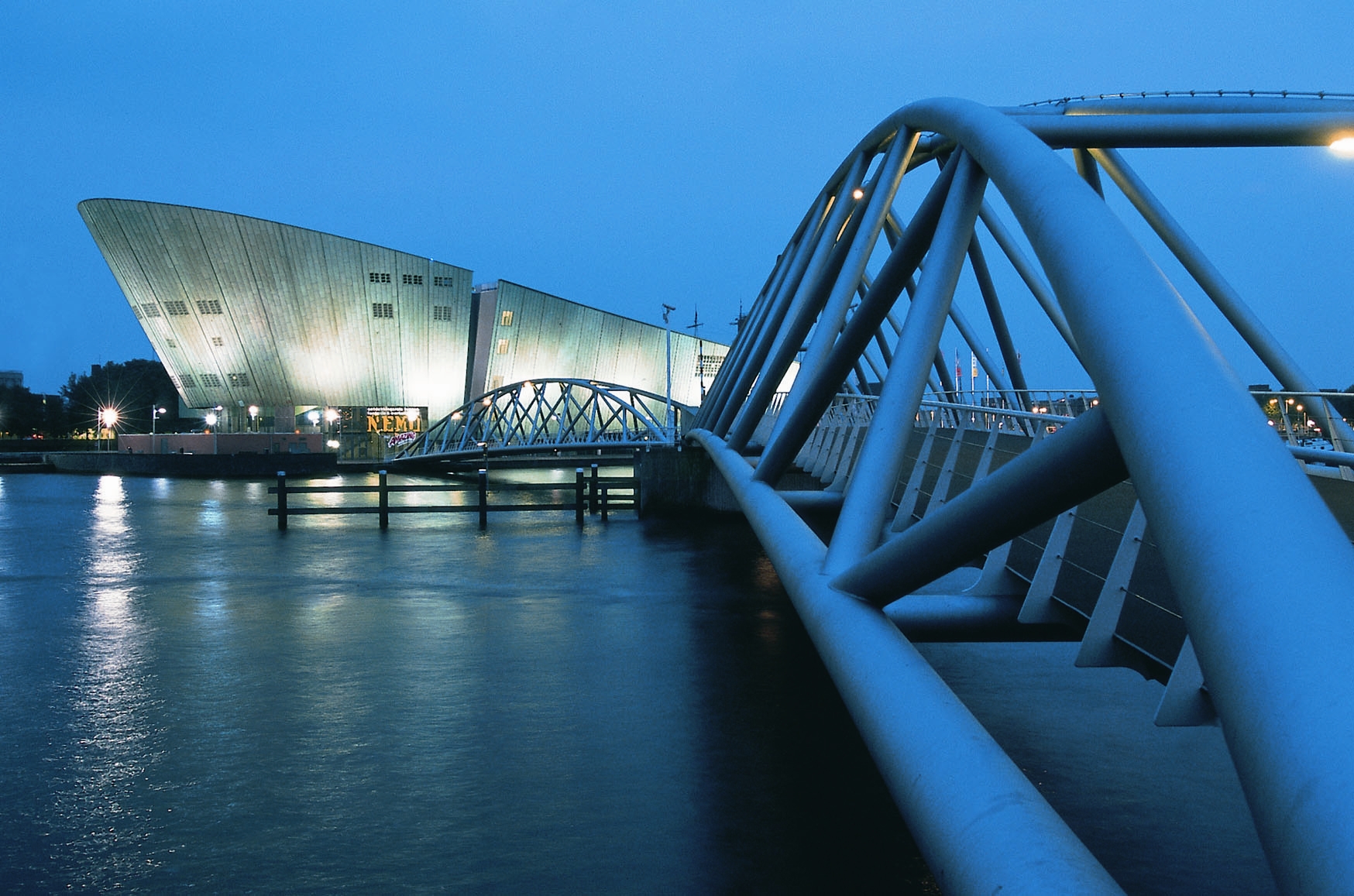 Here are our highlights for an afternoon in the capital city.

Art lovers should head straight for Museumplein where you will find a cluster of world-beating museums, including the Van Gogh Museum, the Stedelijk Museum, devoted to modern and contemporary art, and the Rijksmuseum with its stunning collection of Dutch Golden Age paintings such as ‘The Milkmaid’ by Johannes Vermeer, ‘The Night Watch’ by Rembrandt, and ‘Portrait of a Young Couple’ by Frans Hals. The city’s favourite park, Vondelpark, is also here and is a perfect place to sit and digest everything you have seen before setting off for the Rembrandt House Museum at Jodenbreestraat 4 where the artist lived and worked from 1639 to 1658. 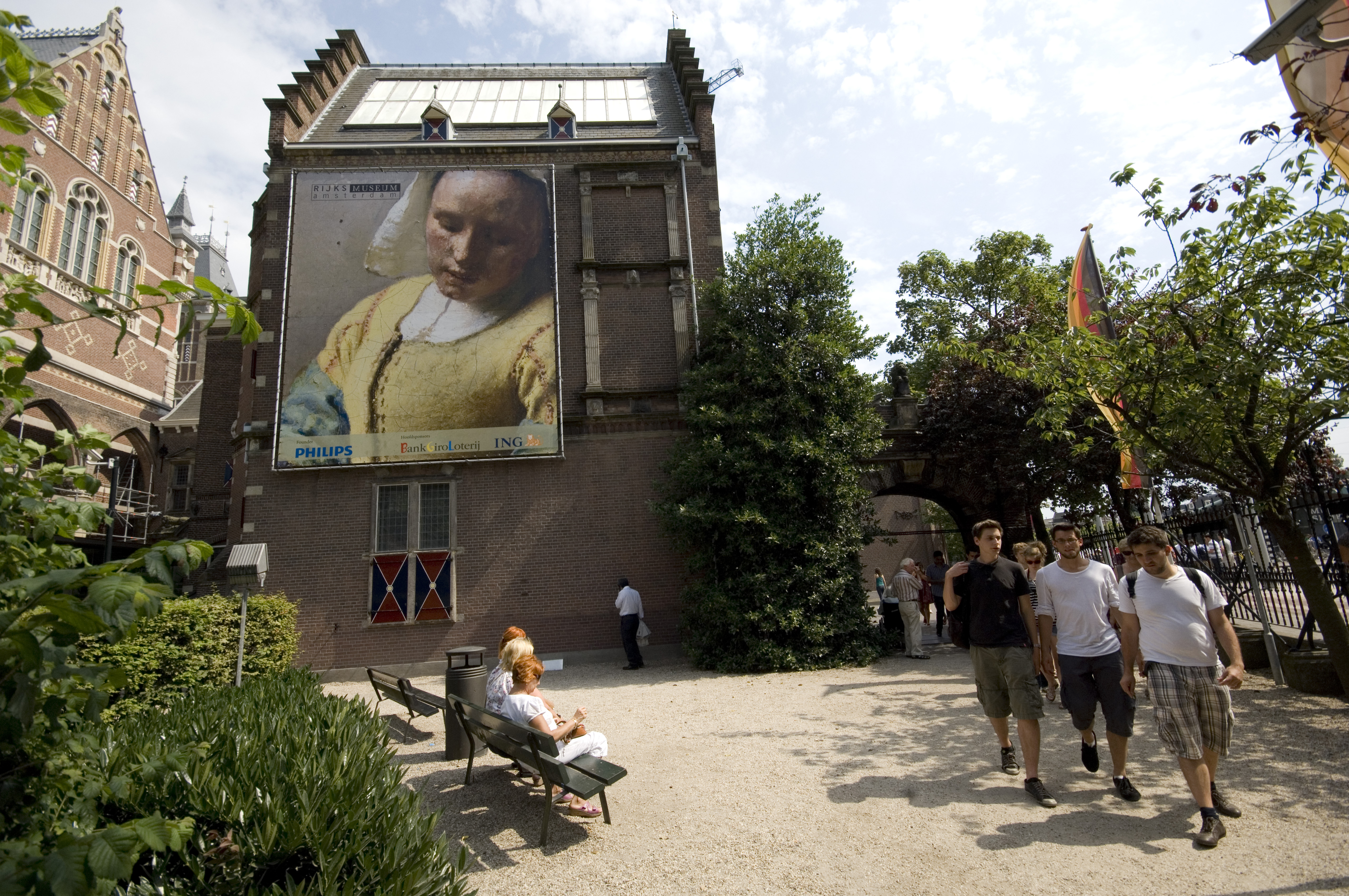 Amsterdam’s Golden Age history can be seen in all its elegance at the Herengracht, the first of the four main canals in the city centre’s Canal Belt. Completed along with its neighbours in the 17th century as part of an expansion project that is now UNESCO listed, this is where Amsterdam’s social elite built their grand gabled houses. Look out for the former office of the Dutch West India Company at Herenmarkt, one of Amsterdam’s oldest residences (built in 1590) at no. 81 and, at no. 172, the magnificent 1617 Bartolotti House, considered the finest of all of Amsterdam’s Golden Age merchant’s houses. Museum Van Loon, in the neighbouring Keizersgracht, provides an insight into the splendour these 17th C merchants lived in. A magnificent private residence built in 1672 by the architect Adriaen Dortsman, its first resident was the painter Ferdinand Bol, a pupil of Rembrandt. The interior of the house has remained largely intact and includes a large collection of paintings, fine furniture, precious silvery and porcelain. Behind the house is a beautiful garden, laid out in formal style and bordered on the far side by the classical facade of the coach house. The original unity of the canal house, garden and coach house is unique. You should also visit The Royal Palace on Dam Square. Designed by architect Jan van Campen to reflect the power and wealth of this city in 17thC, this is the largest and most prestigious building of the era.

The Anne Frank House on the Prinsengracht preserves the secret annexe where the young diarist hid from Nazi persecution from 1942 until she was captured, along with her family and four other inhabitants, in 1944. The secret rooms are on an enclosed courtyard behind a 17th-century canal house and give a visceral sense of what it was like to live in hiding.

And if you are looking for cafes to watch the world go by, as well as specialist shops and galleries for interesting souvenirs, head for the Jordaan, a grid of little streets and filled-in canals bordered by the Singel. Created in the 17th century, this area was first inhabited by Amsterdam’s working class and an international array of migrants, such as the Huguenots from France and Puritans from England, all seeking the city’s famous religious tolerance. Today it offers a picture postcard slice of Amsterdam life. Don’t leave without dropping into a ‘brown café (a Dutch pub), or tasting a traditional bitterballen (deep fried breaded meatball). 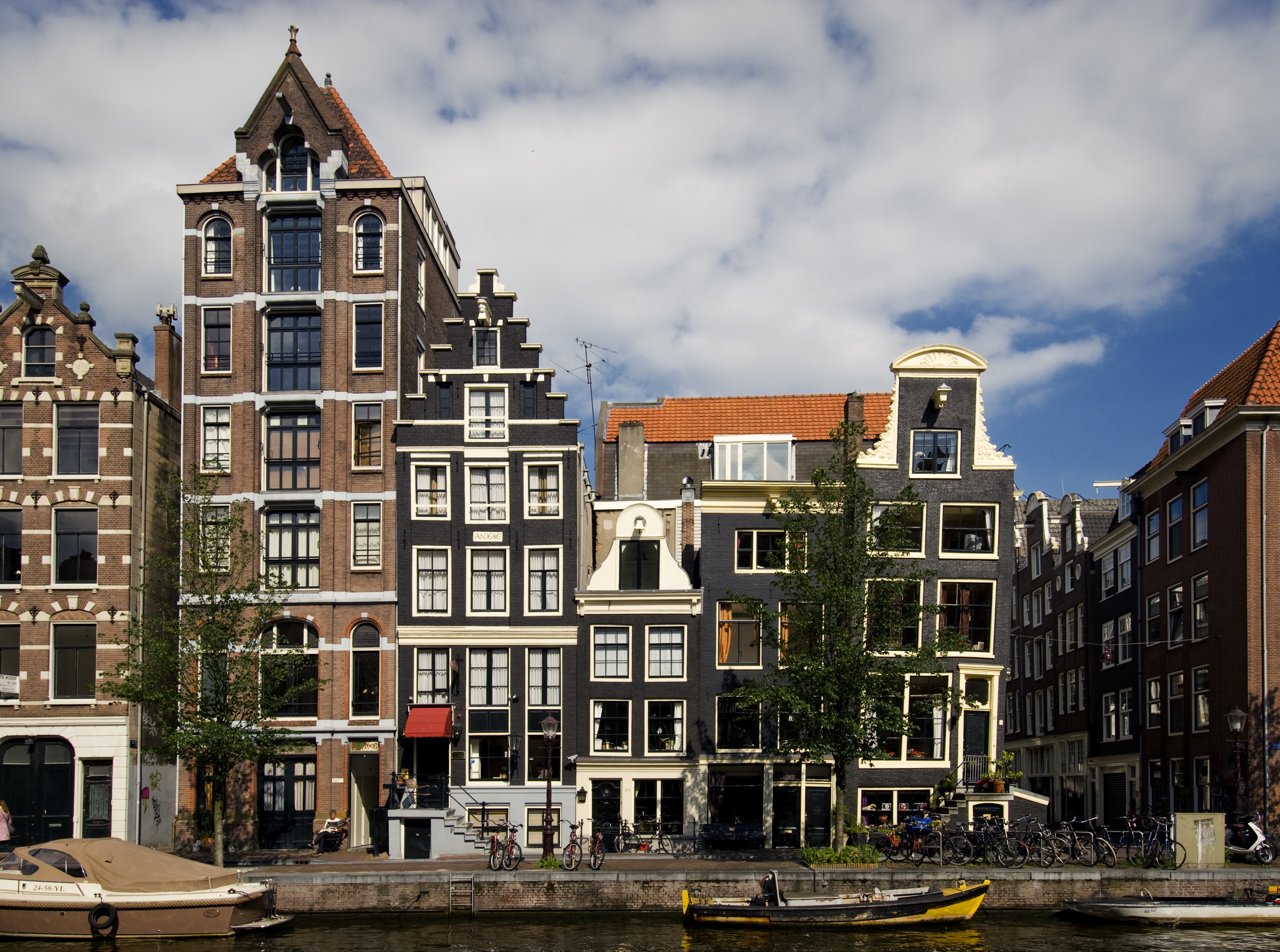 Flowers and Gardens at Floriade 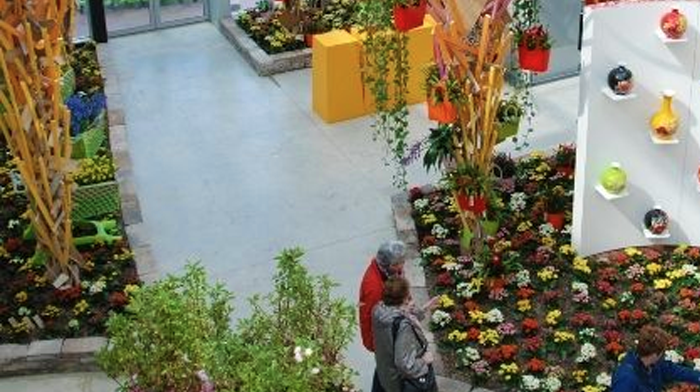 One of the highlight features of Floriade Expo 2022 will be the Flower Art Project Classics & Future.

This outdoor, natural gallery will be made up of eight colourful gardens, each one cleverly slanted so you can see them from afar and featuring a special 'selfie' square.

“Maybe you are familiar with the photogenic flower bulb fields in Holland which are very popular with tourists. We used that idea in the construction of these gardens, and I can tell you that it will be very beautiful, “says Niek Roozen, landscape architect at Floriade. 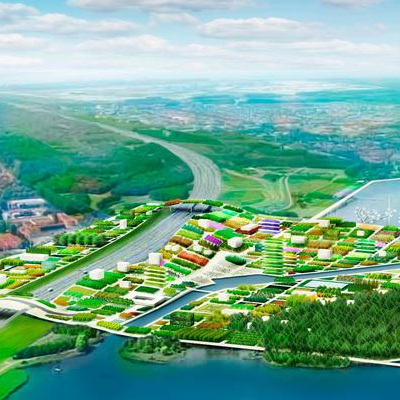 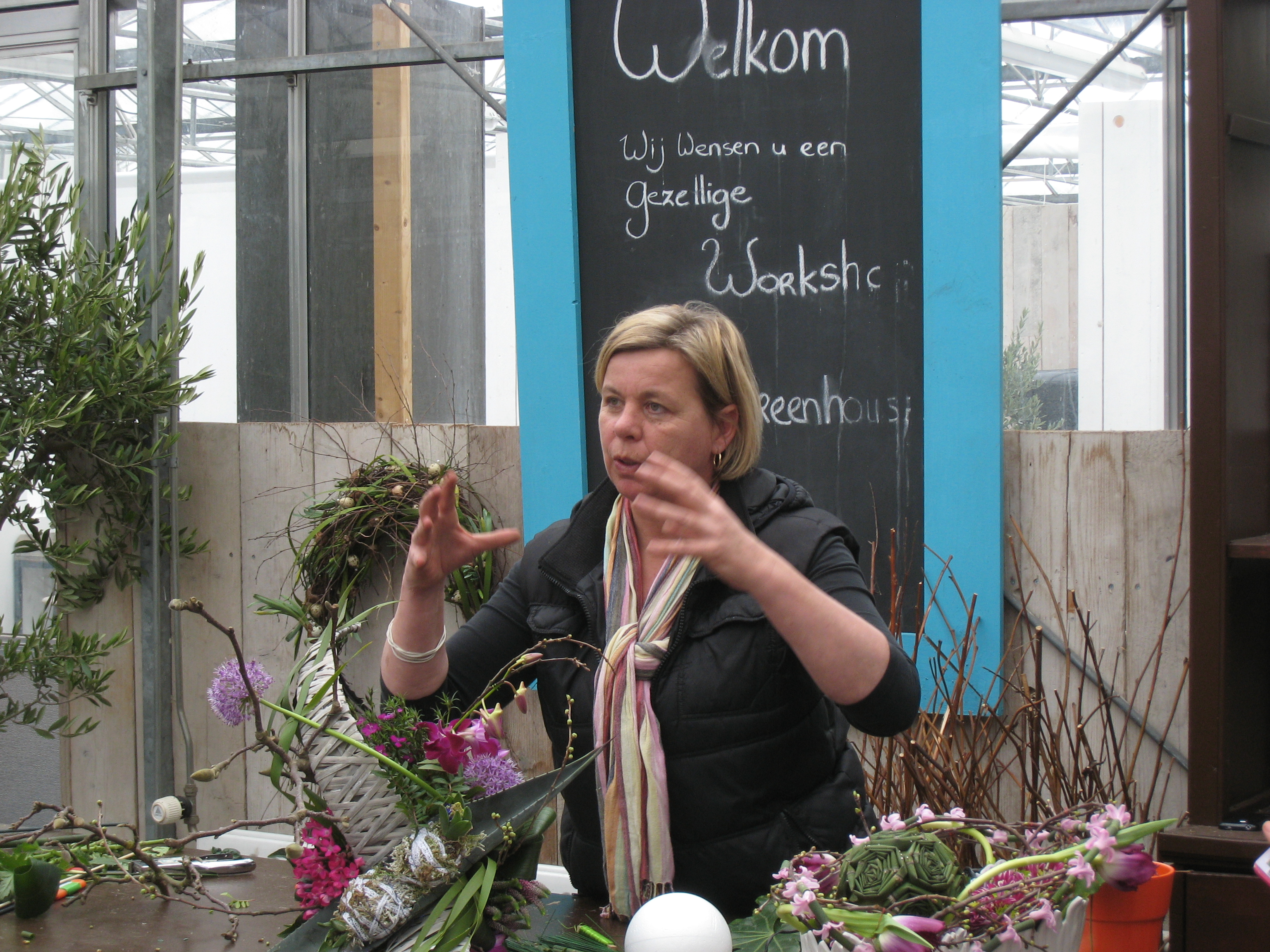 Astrid founded Greenhouse in 1995 with a pocket book of ideas and the ambition to be the best florist in the region. Her parents were growers, and  Astrid created her first display when she was six, in a competition at a friend’s birthday party.

I’m very enthusiastic about flowers and all the things you can do with them and I really enjoy passing this passion on! 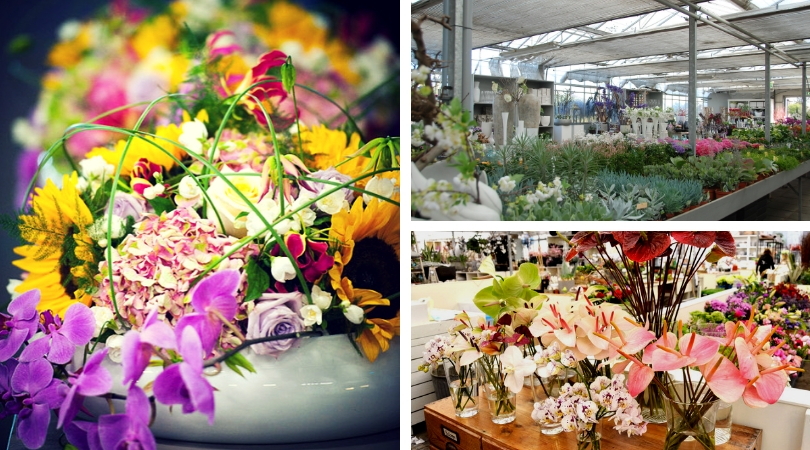 Floral design has become a big part of Van Den Berg Nurseries, working a lot with plant breeders, creating designs for shows such as Keukenhof. The breeders provide the latest flowers to work with –  some varieties often are so new they haven’t even been named yet.

Incorporated in the workshop and Nursery is a wonderful shop selling all the accessories you need to create your own displays.

Astrid will provide a series of demonstrations and provide a lively talk, sharing her passion for designing and arrange with flowers and foliage. 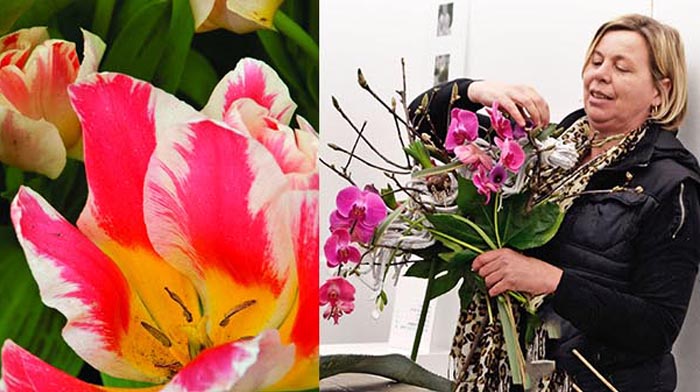